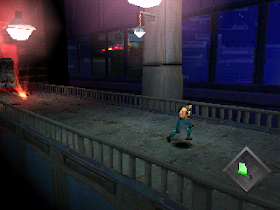 Genre: Action
Perspective: 3rd-person
Published by: ASC Games
Developed by: Visual Concepts Entertainment
Released: 1997
Platform: PlayStation (PSX, PS1)
This game with a rather strange name has five levels on which the hero will face deadly hunters, armored cars and other mechanical monsters of the military arsenal. And to fight with all this enemy mob, your hero has plasma flamethrowers and rocket launchers. But, in addition, in a critical situation, he can perform acrobatic jumps, rolls, climb walls, hang on his hands and crawl crawling. He can even attack with bare hands - at worst!
Well, now about the plot. Abandoned for 40 years into the future, John Cain (ie you) wakes up in an unfamiliar world, inhabited by mechanical monsters and hostile stormtroopers. But the changes in the world are nothing by comparison in his body! In place of his left hand, a cold steel blaster has grown! Our hero rushes into battle not only to protect himself and destroy enemies, but the main thing is to find out who did this to him?
The levels in the game are large, originally executed. They provide greater freedom of maneuver and movement. It happens in the gorge, in the city, and even underground.
A novelty in the game is the lack of traditional indicators of health and strength. Here works the so-called "Rage meter" - an indicator of anger. In other words, the more angry John becomes, the crushing his attacks become.
Another novelty is the "floating camera". You will not miss a grain of action! It provides both large and small plans, and also shows some interesting opportunities. So, in the battle with the boss-helicopter, John is shown as if from a helicopter. It gives such dynamic and interesting perspectives that the spirit captures! In addition to the boss-helicopter there is also a boss - a giant robot, pursuing John in the tunnel. To destroy this mechanical monster, John must shoot at the supporting beams of the ceiling of the tunnel. If it hits, it will bury the monster under the wreckage.

Boss of the first stage

Climb to the very top of the tower and shoot the "drums" on the supporting beams.

Boss of the second stage

Actually, the boss is not here. Shoot as many ships as possible. But if your own ship gets heavily damaged, it will explode.

Boss of the third stage

Do not waste time trying to shoot down the last helicopter. Instead, stand near the complex, and let the rockets be released directly into you. If at the last minute you manage to jump aside, you will remain intact, and the missiles will destroy the complex. But when the complex is destroyed, you can go to the next stage.
‹
›
Home
View web version