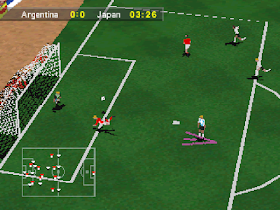 Genre: Sports
Perspective: 3rd-person
Sport: Football (European) / Soccer
Visual: Isometric
Published by: Eidos Interactive, Inc., Panasonic Interactive Media, U.S. Gold Ltd.
Developed by: Silicon Dreams Studio Ltd.
Released: 1996
Platform: 3DO Interactive Multiplayer
This game is dedicated to the 1996 Summer Olympics in Atlanta. These games were notable for the fact that a separate women's football tournament started exactly since 1996, but it did not reflect in the game. And we have quite a traditional male football. The game is completely made in 3D, with the already quite traditional view of the football field by then. The game plays a very nice music. The game has a sufficient number of settings, including weather conditions. A large number of teams, there is also Russia. Four game modes: Arcade, Olympic, Exhibition, League.
‹
›
Home
View web version