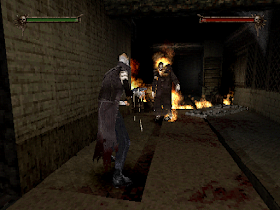 Genre: Action
Perspective: 3rd-person
Gameplay: Puzzle elements
Narrative: Horror
Published by: Konami Corporation
Developed by: Kalisto Entertainment SA
Released: 2000
Platform: PlayStation (PSX, PS1)
Nightmare Creatures - the very name of the game set you up to the appropriate mode. It immediately became clear that before you is not a teaching program for preschool children. The first part of this game, released at the end of 1997, alas, did not stand out as anything against the background of other 3D horror stories. She did not become a super hit, but there was no crushing failure either - a solid 3D chopper with the extremely thickened atmosphere of a nightmare. You were transferred to London in the first third of the last century. But the dark winding streets and alleys of the capital of the British Empire are teeming with half-decayed zombies, four-armed demons, winged gargoyles, hellish beagles and other unpleasant creatures who clearly do not belong in the streets of good old London. The sweep of the British capital from the otherworldly evil, as always, engaged in the main character and the main character. The main drawback of the game, according to some too fastidious fans, was too primitive gameplay, - the task of the player was reduced, mainly to purposefully go ahead, methodically destroying everything that will meet on the way. Neither you tricky puzzles, nor artful manipulations with objects, keys and other things, or dizzying acrobatic tricks in the spirit of Tomb Rider. The company Kalisto, the developer of the game, took into account the remarks - a new game, according to their assurances, a worthy competitor of such hits as Resident Evil 3 and Legacy Of Kain: Soul Reaver.
In the first part of the game, you had to deal with the evil Satanist and the black magician Adam Crowley (apparently, his prototype was the famous real-life satanist Alistair Crowley, who did not manage to make such disgraces as his namesake from the game). Black magicians, as is known, are distinguished by increased survivability. So it's not surprising that one hundred years later Adam Crowley returns and takes up the old. And you, of course, will again have to save the unfortunate objective reality from the massive invasion of the forces of infernal evil. The game is a new, more modern 3D graphics engine. The gameplay is changed to a little bit more stress on the player's intelligence.

Pause the game, then hold L1 + R2 + Circle + Square and press Select. You will get to the "Cheats" menu, and the "Hero Unlimited Live" option will appear.

Show the rest of the lives of enemies

Pause the game, then press R2 + L1 + Circle + Square and press Select. Select the option "Cheats", in the tricks menu, press L1 + R1 + Select. Raise any Power-Ups to increase the corresponding attribute to 100%.

On the main menu screen, while holding R2 + L1 + Circle + Square, press Select. The message that appears on the screen will confirm the correct code entry.

When you meet face to face with deadly enemies, you need to show sufficient skill, one strength and courage is not enough. In order to survive, it is best to strike first, to try and strike a second time before the enemy has time to do it and, of course, you have to manage to put the last finishing blow. Here is a list of combat techniques that will allow you to survive in the most difficult battles.
‹
›
Home
View web version