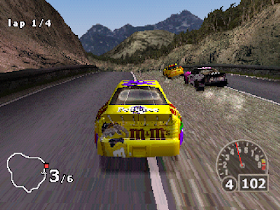 Genre: Racing / Driving
Perspective: Behind view
Gameplay: Arcade, Vehicle Simulator
Vehicular: Automobile, Track Racing
Published by: Electronic Arts
Developed by: Electronic Arts Redwood Shores Studio
Released: 2000
Platform: PlayStation (PSX, PS1)
Many games of the NASCAR series seemed boring, many did not arrange ring races, I wanted something in the spirit of Need For Speed ​​or Twisted Metal. Apparently part of the employees of Electronic Arts overpowered similar thoughts and in their midst the idea of ​​creating such a game ripened, namely, to combine the race, the arcade and the lawlessness on the roads. To hell with the oval track, to hell, the stadiums and crowds of fans, now the race takes place on fictional and real routes, through forests, mountains and villages, have hidden places for the possibility of maneuver and cunning. But the most important rule now is - no rules! On the highway are scattered various bonuses like tornadoes, hurricane wind, freezer, turbo acceleration, cans of oil and the like. Now about the physics of the machine - no physics! The machine flies like Hot Wheels / Hot Rod, goes to ram (damages are true), huge speed. The game has a large number of modes, tracks, racers (real and fictional), cars (even on a tractor ride), there is the possibility of modifying the machine . NASCAR Rumble is a very good and fun game, with great graphics and gameplay.

To be able to use additional cars, you must find keys on different routes. These keys seem to represent every secret car. Find them is difficult enough, and we will try to help you. In order to find such a key, it is not necessary to win on the track. You just need to cross the finish line.

This machine is located at the level of Marti Graw Set on the track Big Easy. Move towards the middle of the road. Here you can cut a hefty piece, if you drive right, right through the house. Inside the house, enter the very last room and turn right into the bookshelf, the wall will break and you will see the key ahead.

This car is located on the Bad Lands Set level on the Stoney Creek road. At the very last turn of this track, keep to the left, perform the jump and land on the cornice. You can back up or just turn around and drive along the ledge in the opposite direction. Then find the key in front of you.

It is located on the Metropolis Set level on the Ship Shape track. Closer to the end of this route, after the tunnel, immediately you will see one more road, walking next to yours. When the first chance appears, take the other road and follow it until the end. There you will find the key.

Located at the Beach Blast Set on the Dog Tired track. After three sharp turns on the left, find a place that allows you to cut the corner. Immediately turn there and make a big jump to the dog track (Dog Track). Make a circle around it and you will see the key on the second turn.

Located at the level of the Southern Exposure Set on the Fowl Play track. Closer to the end of the route there is a place for cutting through the chicken coop. Half-way through this chicken coop, straighten it into its wall and find the key just behind the broken wall.

Located at the level of the Southern Exposure Set on the Hog Hollow track. After cutting through the fences of the farm, you will see a gas station directly in front of you. Taranto the garage door, get the key.

Located at the Metropolis Set level on the Night Flight track. Follow along the road, which after the tunnel goes to the left, then to the right. You will see a large orange box near the wall. Cut into this box, you will fall just in the tunnel at the end of which there is a key.

Located at the level of GoldRush Set on the Golden Rule track. Go along the road and turn left, after a big jump, stop in front of the fork, turn around and move in the opposite direction to the jump point. In the lower part of the cliff you will see a crack in which the key is located.

This car is at the Beach Blast Set on the RipTide track. Take the first turn, then turn around and head towards the big tent. Go round to the right and find the key near the fence.
‹
›
Home
View web version