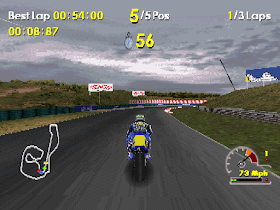 Genre: Racing / Driving, Sports
Perspective: Behind view
Gameplay: Tricks / Stunts
Vehicular: Motorcycle
Published by: Infogrames
Developed by: Delphine Software International
Released: 2000
Platform: PlayStation (PSX, PS1)
What is the beauty of a racing game? I do not know, but Dolphine believes that in the Championship (and not she alone, by the way). So the story about it is inevitable. It's clear, the maximum task is to break everyone and everything, arriving first where possible, pulling out all the secret regimes, etc. Actually, everything begins with the selection of one of the eight fictional teams and participation in the championship, I'll perhaps let you down the routine details of this process. To note it is necessary only constantly progressing level of complexity (me, as the child, "have taken out" already on the fourth line) and impressive possibilities on an upgrade of a motorcycle. And the simple replacement of parts for more sophisticated ones is not limited to everything, with a motorcycle you can do wonders, from the choice of tires and ending with the selection of the gear ratio for each gearbox transmission. And although, in my opinion, this is already a bust, many, I know, it is in similar games and like it. In general, the gameplay of the World Tour is diverse enough: firstly, the races are divided into cross and road (which, accordingly, means two classes of motorcycles), but in the game there are also four kinds of competitions: supercross, motocross, street racing and race track, and as much is given for the successful passage of traffic - race around the city at rush hour, tricky freestyle, jumping over obstacles for a while - trial and, finally, a crazy test for the dragster speed. Let's just say, a decent set, and, by the way, all the above-mentioned entertainment is available for two players, for which an additional score is added to the gameplay graph. I wanted to make a new Moto Racer Delphine realistic. Digitized from real tracks, a detailed study of the surrounding world, the most truthful characters, motorcycles and, most importantly, a new physical model of the game world, in combination giving the game the most sought-after realism. However, if you ask me if the game has become more realistic, I will answer that no. More fascinating - no doubt, more real - I do not think so, and I like it. Moto Racer has gained popularity thanks to the dynamic, arcade gameplay, and turn the series into Gran Turismo - the last thing Delphine should have done, and she knows it as well as we do. World Tour is still fast and intuitive, it takes less than fifteen minutes to master the game world. And the physical model is probably the most successful compromise between the simulation and the arcade, which I saw today for today.
The bike is control playfully, but at the same time it requires a bit of skill to stay on the track or fit into a particularly tricky turn. Separate mention deserves the system of controlling collisions. Flexible enough, it is a real step forward from the standard "backlog - fell." A clash in the World Tour does not necessarily mean a fall - it all depends on your skill, luck, and a combination of circumstances. Also part of the success is attributed to the management account. Honestly, there's nothing to comment on here: sitting behind the console, about the joypad in your hands, you simply forget that, in my opinion, the main sign of competent management. Do your own conclusions. In fact, to describe the graphics - the lesson is empty, the screenshots with the task are better than the words. But do I have to write something? In addition, where, how not here, can I pretend to be clever by screwing up a couple of tricky words (antialiasing or clipping, for example)? For World Tour, Dolphine wrote a new graphics engine with improved visual rendering and an advanced dynamic modeling system. This allowed artists to improve the quality of textures and create characters that look and move normally (using Inverse Cinematic proprietary technology). It is all presented in an intelligent resolution of 512x256, with a pontoon mip mapping effect and an animation speed of 30 frames per second. Or, to put it more simply, the game looks decent. Excellent models of motorcycles and characters, pretty smooth animation and no (bad, in the sense) backgrounds. In general, at the level of the possibilities of PlayStation, but no more. You can also add a few words about the sound. The noise of engines was digitized from real motorcycles, and, probably, from this, all motorcycles in the game sound the same. Distinguished only by the fact that some "scream" and others "growl". And the music in the game, among other things, "studio quality" (quote from the press release). That, however, on my "Samsung" was not felt at all. So, the usual guitar pop and rather inexpressive, I note, but eventually you get used to it and even (Oh God!) Begins to like. In general, it is suitable, we put the seven on both points and close the topic.
‹
›
Home
View web version