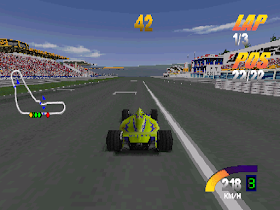 Genre: Racing / Driving, Sports
Perspective: 1st-person, Behind view
Vehicular: Automobile, Track Racing
Published by: Ubi Soft Entertainment Software
Developed by: Ubi Soft Entertainment Software
Released: 1999
Platform: PlayStation (PSX, PS1)
Continuation of the racing simulator F1 Racing Simulation, and at the same time - attention! - for some time really original game in this genre. The license from "Formula 1" here, however, is greatly stripped down: only on the tracks - but not on the teams and the drivers themselves, so all the names of the "stables" and the names of the pilots are fictitious.
There are two global "ways" of passage - arcade ("easy") and "simulator" ("realistic"). In the latter, it is not only much more difficult to manage a car, but many settings of its various systems are also available, and, most importantly, there are many more game sub-modes. In particular, there are: training (we drive alone); "race against time" (compete with "ghosts", and not with real rivals, trying to come to the finish as quickly as possible); "separate race" (you can choose one of the many real tracks - not only in Monaco, but also, for example, in Canada, Australia or Austria - and try to beat all the rivals on it); "Grand Prix" (runs on one chosen track, but in four stages: practice (you can skip), qualification, "warming up" and the actual race); "championship": you can go both in the "default" order - without the possibility of selecting routes, and in the mode of self-determination of their sequence (however, regardless of this, to win you need to go through all the available stages, and the position of your car at the start of each subsequent race is determined by the place occupied in the previous one); "career" - there is no choice of route or team: the latter is already "attached to you" - this is some kind of obscure "stable", which will "lead to success"; "scenario" is another mode without any options for starting selection: this is a set of situations when you, playing for a specific driver on a specific route, have to fulfill the task formulated before the start of the race. In the case of choosing an "easy" mode of passage, only the "separate race", "grand prix" and "championship" will be available. Note that regardless of the choice of the "method" and the game mode, it is possible to set one of the three difficulty levels, which apparently affect the artificial intellect of opponents, the severity of the damages received by the machine (it is quite possible to break here), and so on.
Probably, many players will be disappointed by the uniformity of the appearance of cars, as well as the actual lack of a full license - but these shortcomings are completely compensated for by the quite good physics of the gameplay (in the "simulator" mode, some twists may really be a deadly danger), wide possibilities in terms of settings car (from telemetry and shock absorbers to the braking system and suspensions), the availability of switching the perspective of the survey, and most importantly - by any variety of the m ass. The graphics are in full 3D, and Glide is also supported, but the flat textures of the stands, which are too out of the general background, are a little depressing. For fans of exotics there are several surprises: for example, "retro-mode", in which you can drive on the models of the 1950s, and an integrated editor that allows you to create your own tracks. In general, it is quite difficult, exciting and just a good race.
‹
›
Home
View web version