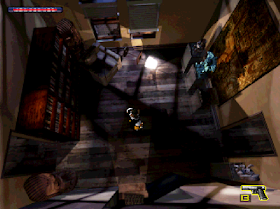 Genre: Action
Perspective: 3rd-person
Gameplay: Puzzle elements, Shooter
Visual: Cinematic camera
Setting: Sci-Fi / Futuristic
Published by: Gremlin Interactive Limited
Developed by: Gigawatt Studios
Released: 1998
Platform: PlayStation (PSX, PS1)
Something too freely began to feel on a small planet Earth a different alien evil spirits. The revelry of galactic crime must be stopped. Employees of the Organization stand guard over the vital interests of the Aboriginal people of the Earth. You have to become one of them. Protect Earth from space scum! MiB (Men in Black) is an abbreviation of a non-existent organization whose employees carry out total control over the migration and emigration of aliens within the Earth, incidentally hiding the fact of their existence for the inhabitants of the blue planet. To do this, they have at their disposal the best technology and weapons borrowed from the same aliens, since their development has largely bypassed the Earth. Despite the fact that the game was developed simultaneously with the movie, the plot of the version for the PlayStation almost does not coincide with the original and immerses you in the fight against the insidious aliens who have made an alliance against the Earth and are trying to destroy it.
You choose any of the three characters (Kay, Jay or Dr. Weaver) and go for adventures, 12 levels in length - three missions, with four sub-missions in each. To be more precise, the choice of the character will appear after the first part of the game. And although the plot of the game is completely new, the presence of cult characters and the arming of the characters unites the game and the film. About the characters written above, and a line of cool "guns" in stock, from De-Atomizer to Pulsar Arm Cannon.
The game action is a "cocktail" of puzzles and a steep action movie, including hand-to-hand combat, which has enough space for it, because you do not have ammo. I must say that perhaps the lack of a "battle on the kulaks" would have gone to the benefit of the game, because they are causing inconvenience (in view of a not very well thought out management system) and can scare off a potential player.
Graphics looks great (although sometimes dark); all the action takes place in a 3D space created using polygonal models. The characters move very smoothly and naturally. Digitized images of the main actors in the film - Tommy Lee Jones, Will Smith and Linda Fiorentino - look just amazing. The same impression is produced and background images - from the headquarters of MiB to the caves of aliens. The camera (s), graphics, as well as solutions for solving puzzles - will remind you of Resident Evil.
‹
›
Home
View web version