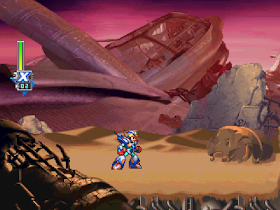 Genre: Action
Perspective: 3rd-person, Side view
Gameplay: Shooter
Art: Anime / Manga
Setting: Sci-Fi / Futuristic
Published by: Capcom Entertainment
Developed by: Capcom Co.
Released: 2001
Platform: PlayStation (PSX, PS1)
The story begins three weeks after the game Mega Man X5. Zero is absent, since it is considered dead and the surface of the Earth becomes uninhabitable because of the fall of the colony of Eurasia. Ix is given the task to destroy the Mavericks in the zone where he encounters a creature resembling Zero, which looks purple, and not red like a real Zero. X meets the scientist Isoku and his subordinate High Maxim, who considers Zero's search as the Dreadful Phenomenon. Iskok invites the Ploidoids to join his cause in order to destroy the virus of the Nightmarish Phenomenon, which turned to the side of the population laid in the Mavericks.
X moves forward to explore the zones to investigate the phenomenon of the Nightmare Phenomenon and find the Zero counterpart. During the adventure, X met eight Isoka researchers who were actually infected with the Nightmare Phenomenon and became Mavericks. During the battle, X can also encounter Zero's counterpart and defeat him. After that, the real Zero appears and says that he does not know how he managed to survive after the battle against Sigma. After the defeat of eight researchers or the High High, X satisfies the find of the researcher Geith. Using a piece from the damaged part of Zero's body, Gate created the Nightmare Phenomenon virus, along with Zero's Dreadful Phenomenon, in order to create his own utopia.
Hunters on the Mavericks go to Geith's lab to put an end to his plans. After the defeat of Gheit, he shows that he restored Sigma, which was not fully restored. Nevertheless, Sigma almost kills Geith and causes his old enemies. Sigma won again.
The endings depend on the choice of the character that Sigma wins. If X defeats Sigma, then he saves Geith and Alia, the girlfriend of X, who can restore him. Such an ending is displayed provided that X does not find Zero, which decides not to return to the battle. In the event that Zero defeats Sigma, he asks to be sealed to remove the component from his body.

Weapons of the Mavericks