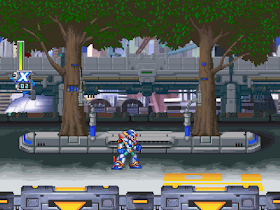 Before the start of the game, the player can go through a training company, thereby gaining the necessary skills to manage the character. At the end of the training he will meet with the robot boss Magma Dragoon from Mega Man X4. In the game itself there are a lot of secrets, which are in 2-3 of each of the eight main levels. In this case, there will necessarily be Life Up and one capsule of Dr. Light (it contains a part of any armor).

As in the earlier parts of the Mega Man X, armor greatly changes the gameplay.

It turns out the same as the Overbrain of X.
At the beginning of the game it can be obtained by selecting Zero and pressing 2 times "up" and 9 times "down".

In the game, there is an opportunity to improve the robots Zero and X. In order to get an improvement, you need to destroy the boss level of at least 10. These levels increase gradually as the strength of the Sigma virus accumulates. In this case, the difficulty level of the game must be either Normal or Hard. After the victory of the boss is given a choice of improvement and, if there is a + sign, then you can produce it. The total number of improvements reaches 16, but only 8 can be selected. However, only four improvements can be carried simultaneously.

The game takes place in 21XX. On the Earth's orbit, the "Eurasia" colony was created. Once upon "Eurasia" attacks the Dynamo, a mercenary-reploid, who is subordinate to Sigma, the main leader of the Maverick hunters. Dynamo brings a virus to the colony, as a result of which mass slaughter occurs on it. Soon it is found out that in 16 hours the colony should fall to the Earth, as a result of which the virus will spread and on the Earth. To prevent this, it is necessary to use the energy gun Enigma, but for this it is necessary to collect four parts from the gun, which, in turn, are in different parts of the planet near the Ousters. However, Dynamo does not give up so easily and constantly hinders Hunters.

Differences and connections from the past parts of the series

Compared to the previous parts of the series, the robots X and Zero can now crouch, which helps to pass certain moments of the game. Unlike the last part - Mega Man X4 this part is less saturated with action, at the same time, the player often has to respond quickly to events. [4] In addition, the number of types of armor has increased, but it is impossible to use it immediately after receipt, and also before collecting the complete set. Also as a secret there is another type of armor and reinforcement for the robot Zero. For the first time in this series, the system of improvements has been worked out.

In the game there is a lot of plot, as well as a kind of cameo ties with the past parts of the series. So at the training level, you can meet the character Magma Dragoon from Mega Man X4. Also, before the fight with the Skiver boss, the latter talks about some Colonel Colonel - he can be found in the last part. There are references to the first part, when Squid Adler before the fight speaks about Octopardo - this is the correct pronunciation of the name of the boss Launch Octopus. The boss of Dynamo, at the first meeting with him, behaves and attacks almost identical to the first form of the final boss Sigma from Mega Man X3.
The Tri-Thunder weapon from X, which the latter receives after the destruction of the Squid Adler, is very similar to one of the weapons from the first Mega Man. [4] In addition, Black Devil, once in the former part, in this part is also vulnerable to it. The similarity of the design of the last levels of the game with the previous parts of the series was not bypassed either. Has a certain similarity of weapons shots when playing for X with a charged attack Double Cyclone of Mega Man X4.
Also, if you pass the game for Ziro, then in the last сutscenever you can see Dr. Wylie (Dr. Wily), the plot analog of Sigma in the classic Mega Man series.
‹
›
Home
View web version