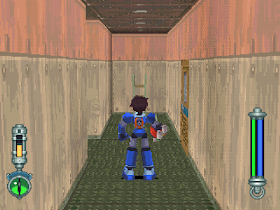 After exploring the island of Kattelox and having rescued her from the Bones, Mega Man, Roll and Professor Barrell take a rest period.
Meanwhile, the professor travels with an old friend from his times of Digger Von Bluecher who, using all his fortune, builds a ship called Sulfur Bottom to try to land in the place where Mother Lode's treasure is found, which is obstructed by a seemingly perpetual storm. at the polar end of the world.
The professor and his friend Von had tried 30 years ago but both crashed and lost their memory, but before losing their memory, they saw a mysterious girl, the legend tells that all those who have survived in their attempt to enter the Mother Lode have seen this girl.
The Mother Lode is on a forbidden island that is covered by an impenetrable cloud.
Meanwhile, Tron, Tiesel and company are spying on the operation that is already covered by the press generating great expectations, minutes before starting, a mysterious girl appears and gives them a warning about the danger involved in opening the treasure, and It goes between a big bustle.
The expedition continues and the girl reappears, but this time she attacks with her vehicle and the Sulfur Bottom falls into the storm with everything and her frightened crew, this is seen from TV Mega Man and Roll and then they go to help the teacher.
In their adventure, Mega Man and Roll will have to face again the Bonnes and a new pirate, Glyde and his Birdbots.
In the future, Mega Man's true past is discovered. He was an irregular hunter of the Elysium (place to cross to enter the Mother Lode), but what is not revealed is who he was, 3000 years ago, the master creator of the Elysium that created all the ruins of Terra and according to It seems he was very close to Mega Man.
Then Mega Man in the present, looks for the 4 keys that will open the Elysium (described in the game as a place where youth and peace reigns), which leads to the treasure of the Mother Lode, however, these 4 Keys are in 4 ruins located in the different islands of the game and are guarded by a special boss.
After Mega Man gets the 4 Keys, he travels in a ship to the Elysium and manages to reach the Mother Lode where he must face the guardians of the four keys and finally with Sera, after this battle, the armor of Sera is destroyed and this Take a graphic recreation of Yuna's body. This causes the Elysium to close permanently.
Then the game ends here, with Mega Man and Sera transformed into Yuna in the closed Elysium.

Some curious things are that the Calinca Island, to be exact in Yosyonke City, in a store where you buy health items in front of the post office, is a poster of Black Zero and approaching him says: "A poster of a cartoon hero "and in a nearby bar is a television set with images of the first Mega Man series where Mega Man falls from a cliff and Protoman comes out to meet them, a robot throws a rock at them; when approaching said television it says: "A program of popular cartoons on TV, the characters are familiar to me somehow ...", these two places are close to a "Junk Shop" that to locate it better, is close to the train tracks, where Mega Man fought for the last time against the pirates, Mega Man was on board a vehicle driven by Roll.
In the Flutter, or the ship in which Mega Man moves from one island to another in Professor Barrell's room, there is a scale model of this ship on top of a caisson, as well as a photograph in the room that is lowering the stairs.
‹
›
Home
View web version