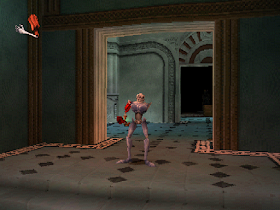 Genre: Action
Perspective: 3rd-person
Gameplay: Puzzle elements
Narrative: Horror
Published by: Sony Computer Entertainment America
Developed by: SCE Studio Cambridge
Released: 2000
Platform: PlayStation (PSX, PS1)
Five hundred years have elapsed since Sir Dan Fortescue defeated Zarok the evil sorcerer in 1386, after which he rested in the world and was placed in the Hall of Heroes of the museum in Kinsington, but apparently no fate to rest ... Lord Palethorn was able to find somewhere on dusty shelves Zaroka's spellbook and now dreams about world domination. He brings back to life a lot of ghouls (forgive Sir ...) and Fortescue including, not suspecting that the sim signed a death sentence. It's good that the pages of the book are scattered here and there, and collecting them, Sir Fortescue and his companion (part-time adviser) Ghost Winston (Winston), will perfectly confuse Palaforne's plans.
The action and concept of the second part of the game are similar to the first series, but there are a number of differences, in particular, the change of the time era allowed Den to acquire firearms, namely pistols, shotguns and even a Gatling machine gun, of course the sword and other cold weapons are also not forgotten. Now our Sir Skeleton can use two weapons in combat, as needed, quickly switching between them. Another fun innovation is that Dan can send his head for exploration, although for this period he can not control his body, but it's worth it, because some of the puzzles and hidden treasures can only be found in this mode.
‹
›
Home
View web version