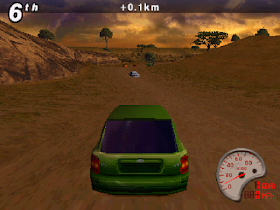 Genre: Racing / Driving, Simulation
Perspective: 1st-person, 3rd-person
Published by: Infogrames Europe SA
Developed by: Eutechnyx Limited
Released: 1998
Platform: PlayStation (PSX, PS1)
The best cars of the world are at your service to participate in a worldwide competition that will allow you to test yourself and your driving skills. C3 Racing, the most difficult test for the symbiosis of man and machine in the world of PlayStation. C3 Racing - World Championship in auto racing, organized by the largest car manufacturers. Choose the car of your dreams and take part in ten stages of the competition, which take place in different corners of the globe, discovering new machines and levels of complexity as your skill develops. This championship will open for you many secrets of skill and will lead to a fundamentally new level of competition, first available in this race of a new generation, combining incredible realism with the effect of personal empathy, comparable only with the adrenaline overdose characteristic of the masterpieces of 3D-action. C3 Racing - the most exciting representative of the game-racing for the PlayStation.
Interestingly: The game C3 Racing (Max Power Racing) is essentially a copy of the game TNN Motor Sports Hardcore TR (Buggy Heat), where in addition to a similar engine involved tracks and the construction of the gameplay of the game. If I'm not mistaken in the game, even the soundtrack is the same. The difference is only in the car park.
‹
›
Home
View web version