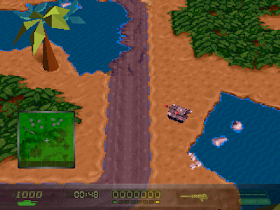 Genre: Action, Strategy / Tactics
Perspective: Top-down
Gameplay: Shooter
Vehicular: Tank
Published by: ASC Games
Developed by: NMS Software Ltd.
Released: 1997
Platform: PlayStation (PSX, PS1)
This is a game devoted to destruction, and in very large quantities. The plot develops in the usual way: the rebellious army has invaded where it should not, and your business is to stop the invasion. For what at your disposal there is only one tank. In total there are three tanks in the game, but you can not switch between them during the battle. The whole game consists of performing several small missions, the successful completion of which will allow you to ultimately cope with the main task. Some missions will not be available to you at the lowest levels of difficulty, which gives you an additional incentive to play. In each mission, you will have different tasks. They can be roughly divided into three categories: blow something up, find something and do not blow up anything. It's simple, but fast and aggressive. You will fight with a large number of enemy vehicles, which have different tactical and technical characteristics. These can be tanks, ships, assault helicopters, bombers, jet planes and the like. Between the explosions you will have a few seconds to listen to vigorous music. When you learn how to shoot, getting into the rhythm of music, you will have a weak chance of winning. In addition to the main combat missions, you will be given additional, without which you will not be able to finish the mission. There are also prize-winning tasks, for which you receive additional points and ammunition. But that you have completed the prize-winning task, you will learn only after its completion. According to the rules of the game you are not supposed to know in advance about what task you perform, prize or not. Mass Destruction has one very big flaw. The fact is that all the missions included in the yoke are rather primitive and similar one to another, and the division of each mission into separate pieces is made at a too low level.