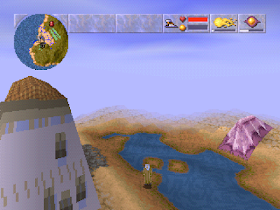 Genre: Action, Compilation
Perspective: 1st-person
Gameplay: Shooter
Vehicular: Flight / Aviation
Published by: Electronic Arts
Developed by: Bullfrog Productions
Released: 1996
Platforms: PlayStation (PSX, PS1), DOS
A wonderful fairy tale in which you fly on a carpet-plane. The goal of your free and beautiful flights is to fight evil spells. And you will not fight with the help of blasters and tank guns, but with the help of magic, witchcraft, spells and other fairy-tale attributes so dear to the heart. Flying on a carpet-plane, you collect some "mana of heaven" (not to be confused with semolina porridge!). This mana in the form of spheres can be anywhere - from you, from a rival wizard, from some monster ... Using spells, you need to build a castle where you will send collected mana.
During the game, enemies will attack you and the castle in order to take away precious mana. Against them you can expose powerful combat magic. You start the game with only two spells: a ball lightning and a power spell that allows you to take possession of any building and mana. In the fight, we must always ensure that we do not accidentally destroy civilians. Otherwise, they will rebel against you, using your own mana. Moving around in the game space, you'll find new, increasingly powerful spells - all of them in game 24, but you can only use two spells at a time, one for each hand. On the screen, the player has either a full level map or an all-seeing eye in which all visible enemies and their locks are marked with dots. Using a special spell, you can see the location of other mages.
The game has two levels of difficulty, which differ both in the degree of aggressiveness of the enemies, and in the number of worlds that need to eradicate evil spells. When transferring Magic Carpet to IBM PC, developers did not make any improvements that could use the full power of 32-bit technology. Therefore, the schedule looks somewhat outdated, which, incidentally, does not spoil the overall impression of the game as a whole.
‹
›
Home
View web version