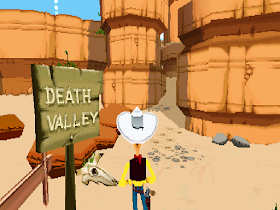 A group of Mexican bandits led by the infamous Dalton brothers captured the Indian wizard named Snake's Nogger hostage. But the law always triumphs if Sheriff Luke does business! The task of the player - acting as Lucky Luke, to track down and eliminate the kidnappers and release the unfortunate Indian from captivity.

The game is divided into 4 game zones. In each of them the task of the player is to solve numerous puzzles, to fight with the waves of evil bandits and neutralize one of the ringleaders - the brothers Dalton. The player acts not alone, during the game he is helped by faithful friends - the dog Vintinken and the Talking Horse.
‹
›
Home
View web version