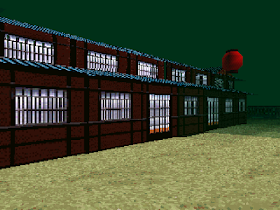 Genre: Simulation
Perspective: 1st-person
Pacing: Meditative / Zen
Narrative: Horror
Published by: Asmik Ace Entertainment
Developed by: OutSide Directors Company Co.
Released: 1998
Platform: PlayStation (PSX, PS1)
In the environment of computer games, there have always been, are and will be masterpieces, "blowing the brain", after which you immediately want to visit a psychiatrist, or at least a psychologist. One such game is "LSD: Dream Emulator", or "dream simulator". The original "Emulator of Dreams" was released a long time ago, in 1998, and was intended for the newly appeared game console PlayStation. Recently, OutSide Directors Company released a remake of the game for Windows, and soon the versions of "LSD: Dream Emulator" for Linux and Mac OS should appear. That, the first version of the "Emulator" was dedicated to dreams that the designer of the game saw, Hiroko Nishikawa. The woman recorded her dreams for 10 years, which is a fairly common practice among the so-called "dreamers". Although, judging by the word LSD in the name of the game, many of her dreams Hiroko Nishikawa saw in reality.
So, the basis of the plot "LSD: Dream Emulator" is that the player travels through dreams, studies a secret bizarre world and interacts with the local environment. Each new dream begins in the apartment, and then a sharp jump - teleportation to another world ("onyron") passes. The situation in the "Dream Simulator" is often very psychedelic: some pictures of the game will cause the player to doubt his own mind. However, all relatively - frankly gloomy pictures are replaced by "light" storylines. It all depends on what mood the player was in the previous sleep. Keep in mind that you can not stumble upon the characters of the game or the furnishings, since after that you will be transferred to another world, which can be even more terrible. One thing pleases - falling even into the deepest abyss does not mean the physical death of your character. Man just wakes up in his apartment. After the first acquaintance with the game, one gets the impression that she is, so to speak, "an amateur". In the "LSD: Dream Emulator" is clearly limited to the number of actions that a player can perform, and the graphics are strange, unusual. And nevertheless, the game is the best of all dream emulators, as it very accurately transmits the whole atmosphere that is inherent in human dreams.
‹
›
Home
View web version