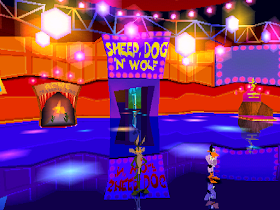 Genre: Action
Perspective: 3rd-person
Gameplay: Platform, Puzzle elements, Stealth
Published by: Infogrames Europe SA
Developed by: Infogrames Europe SA
Released: 2001
Platform: PlayStation (PSX, PS1)
This game is based on the popular Warner Bros. series "The Sheepdog Sam" and "Ralph Wolf". You control Ralph throughout the game, the goal of the player is to steal sheep from the sheepdog Sam through many levels, including 2 secrets and a bonus level.

After another unsuccessful attempt to steal a sheep from the sheepdog Sam, Ralph Wolf enters his cabin to relax and watch television. Pato Lucas breaks into his house and gives Ralph the news that he is the new contestant of the "Perro Ovejero y Lobo" program led by himself (or, as he likes to call it: Who wants to be a lamb thief?) Lucas takes Ralph in his limo to Ciudad Acme, where he "explains" the rules of the game and what he should do. Ralph learns that he will be supplied with various Acme brand items, inventory, and user guides to invent plans to steal Sam's sheep. The levels are clearly represented as scenarios in the Looney Tunes series, from the most classic hot deserts to totally new scenarios, such as the ghostly land. In one of the last levels, one of the circles of the Meta (where the sheep must be placed) is painted on a sail of a ship. Ralph pulls the sheep with a cannon and sends it through the cloth, getting the point.
Marvin the Martian breaks the roof of the studio, gets off his ship, and begins to reproach Ralph that a black sheep came to planet X and destroyed his tank of instant Martians concentrated in liquid, so his army spreads. It is now Ralph's responsibility to fix the damages. Marvin takes Ralph to his planet to solve this problem. This level is the final level, or bonus level. Once he has finished the last level, Ralph wakes up in his house, everything that happened in the video game was a dream.

The game has 18 levels: 14 normal, one training, two hidden and one extra.
Level 0: Acme Training Zone: A training zone where you can train and learn everything you need to know.
Level 1: Level of the waterfall: Two boulders separated by a giant waterfall and linked by a bridge.
Level 2: Level of bushes: A forest where you train at the beginning, high meadows and a raging river.
Level 3: Elastic Level: Two almost floating rocks, separated from each other with a desert canyon with no bottom behind.
Level 4: Fall Level: A labyrinth with leaves, a lake, and Sam's area.
Level 5: Level Snow 1: A snowy landscape with a spiral of snow, an ice slide and catapult.
Level 6: Snow Level 2: A short canyon but with two frozen labyrinths, and a minefield.
Level 7: Snow Level 3: A frozen island full of geysers.
Level 8: Past-Present Level: A double level, without gaps, in this the Magic Stopwatch is used.
Level 9: Sand Level Movediza: Prehistoric level with islets full of quicksand and vines.
Level 10: Cannon level: The entrance to a castle full of cannons.
Level 11: Castle level: You are inside a castle in the open.
Level 12: Ghostly Level: A labyrinth full of ghosts, a jail and Sam's area.
Level 13: Beach Level: Another minefield, a beach and pirate ships, outside a castle.
Level 14: Desert Level: A desert with a train, a road.
Level 15: Level X: The bonus level of the game, you are in full space, in labyrinths and areas without gravity.
Level B1: One of the hidden levels of the game. Description below.
Level B2: The second hidden level of the game. Description below.
‹
›
Home
View web version