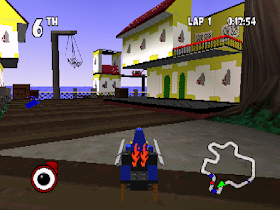 Genre: Racing / Driving
Perspective: Behind view
Gameplay: Arcade, Vehicle Simulator
Interface: Direct Control
Vehicular: Automobile, Track Racing
Published by: LEGO Media International
Developed by: High Voltage Software
Released: 1999
Platform: PlayStation (PSX, PS1)
No matter how old you are, you must have had to deal with colorful LEGO cubes, from which you can do whatever you want. Now these wonderful cubes have invaded two new games on the PlayStation. One of which is similar to the C & C and is called LEGO Rock Raiders, and the second one is an unrealistic kart race, but you do not buy cars .... you do them yourself! In the old good LEGO manner, you can go to a special garage and make your own car and rider, and then compete with a bunch of hooked guys on 12 different routes. These tracks are built on popular LEGO themes, such as pirates, castle, space and adventure. Each of your opponents has their own personality and style of riding, and it will not be easy to overtake them on their native routes unless you find sections on the track and can not pick up several accelerators and weapons that are scattered along the road. But weapons are not only for you, so in the battle for the winner's cup, you will have to avoid attacking opponents. In case of victory, you will be offered some spare parts of the champion's car, which you can use to improve your own car. As you understand, in the whole game the theme of LEGO is everywhere, so we did not expect that the interest from the game will be more than from Speed ​​Freaks, but still it has something new in its genre.
‹
›
Home
View web version