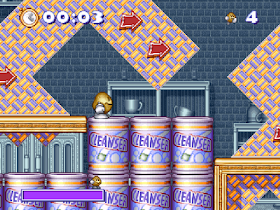 Genre: Action
Perspective: Side view
Gameplay: Platform
Visual: 2D scrolling
Setting: Fantasy
Published by: Panther Software Inc.
Developed by: Panther Software Inc.
Released: 1998
Platform: PlayStation (PSX, PS1)
The rarest version of the Japanese platformer for PS1, in which you play the role of intelligent potatoes. Such a character for an unknown reason is extremely popular in East Asian countries - it is enough to recall the relatively famous Militato game in our region, devoted to gangster wars in the potato world. The plot of this game is very conditional and prosaic, as well as schizophrenic: tin cans, either with lecho or with something similar led by a number of other food products and items, have raised an uprising (against someone) and seized power on a huge kitchen. They are confronted by a single anthropomorphic warfare potato with handles and legs, able to jump, spin in the air (which increases the speed of running and the range of the jump - and the latter in this game is often required to successfully overcome obstacles) and move objects.
In the gameplay it is a fairly standard platformer - due to the almost complete absence of real violence, it is oriented, perhaps, to the children's audience, but in reality it can be difficult for children. The hero has a relatively decent stock of life, but loses his health too quickly (and in some cases - instantly); most of the opponents are the same banks, also anthropomorphic and toothy: they can not be killed, but can be temporarily stunned by jumping on them from above. There are other types of opponents - for example, some toothy ghostly substances that instantly kill and collide when they collide and which they can only avoid; at subsequent levels, other creatures will also meet - especially the fire-breathing saltcellars (or pepper-casks) that meet at the fifth level are very encouraging: slow, but very dangerous creatures, which expel streams of flame from themselves. To successfully pass on each level, you need to find ten sauce boats (the reasons for this are unknown).
There are a lot of levels in the game (the dimensions of the kitchen we were on are truly epic), but the direction in which you want to navigate is marked with pointers (among the elements of the environment there are also some tips - for example, that contact with ghosts is fatal). At the end of each level, there is a fight with the boss, which is a food product, which looks very surreal. Of course, there are also bonuses: various types of food to replenish health, or special things that temporarily give unusual abilities and which, it seems, can already kill enemies (for example, a freezer or rockets). It is impossible to remain within the bounds of the level, but four "lives" are given for its passage. There is no time limit, but it is kept in mind: the faster you pass the level - the better the score on points.
Graphically, the PC version is not inferior at all to the original console - very high-quality 2D with the ability to sometimes "go" slightly to the screen, a lot of funny animation effects (not only in the game, but even in the menu), and so on. In general, the game leaves a very pleasant impression: a sweet hero, high, but not annoying complexity, which has an atmosphere in the best traditions of Asian psychedelic. Taking into account the rarity of the version for our native platform - the most sincere recommendations.
‹
›
Home
View web version