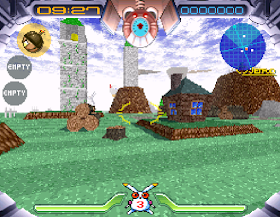 Genre: Action
Perspective: 1st-person
Gameplay: Platform, Shooter
Art: Anime / Manga
Published by: Sony Computer Entertainment of America
Developed by: Exact
Released: 1995
Platform: PlayStation (PSX, PS1)
Finally, together with your children, you can relax with your soul - no violence, no blood and no horrors, so inherent in modern computer games. Although here you will have to fight with the bad Bosses, but their appearance will rather make you smile than fear. So, the main character is a robot, very similar to a rabbit. Armed with lasers and bombs, he travels through various worlds, each of which consists of 3 planets, collecting carrots and destroying a "bad boss" on one of the planets. The whole action unfolds in perspective from the first person (view from the eyes) and in full, 3D measurement. Levels are quite complex in passing, although they seem initially simple.
The way of movement of your hero is reflected in the name of the game - he jumps! And there are two kinds of jumps: the usual one, with which he moves, jumps over enemies, etc. and a super jump that allows you to jump on the upper "floors" and tiers of the planets, as well as striking at the enemy from above. Carrots that you collect will be hidden so skillfully that you will need to draw all of your wits to find them. After defeating the next enemy, you can take away the remaining money, health, weapons or invulnerability. Be sure to use this, as well, hidden in each level by secret prizes tricks. In general, the game is beautiful, joyful, intelligent and quite complex!
‹
›
Home
View web version