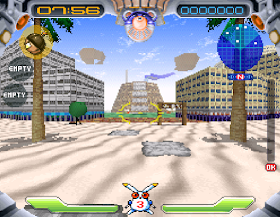 Genre: Action
Perspective: 1st-person
Gameplay: Platform
Published by: Sony Computer Entertainment of America
Developed by: Exact
Released: 1996
Platform: PlayStation (PSX, PS1)
Before you - a new, modernized version of a wonderful game. Your hero is Robbit, Robot-Rabbit. His main enemy is Baron Aloha, who lives on an asteroid. Also in the game there is Captain Suzuki, a giant in sporty tights flying from planet to planet and taking these planets captive. Robbit's task is to save the little white tadpoles named Muu (Little Muu); they are in the most unexpected places, as signals emitting a quiet mooing. Robbit jumps on various platforms replenishing the collection of collecting these eccentric creatures, incidentally shooting back from no less than strange enemies. It's simple, but extremely exciting! And all these actions are very cheerful music and friendly management.
In this game you need to go through 6 worlds; each world consists of two stages plus a final battle with the boss. But there are other modes that need to be stored on an additional memory card. When the game ends in normal mode, the story is reopened. All the worlds must be passed first, but they have already changed slightly! Muu is already hidden in other places, and the schedule has changed, making the game more intricate. The main difference is that the bosses have become much stronger and more insidious, and the struggle with them grows into a real problem.
Finally, there is also the Super-Mode, if this game is passed. Here again the same levels are used, but now you can already jump six times higher.

You can get this powerful weapon either by finding it on the ground or by killing some enemies.

You win medals when you achieve certain success in passing the levels. Collect all 12 medals - and get another managed character in the main menu - Rachel.
Note: the character must be defeated once (even if he appears again on a different level). However, it is necessary to defeat each variety of enemies of each color. For combinations of "parent-child" (such combinations of three, two variations) it is enough to defeat the parent and one child. You can receive the Kudos medal not earlier than Extra 1-1, because only there the last new character appears.

A lot of various scoundrels are scattered around the worlds of the game. Below are listed only the main ones that occur in the first four worlds.
‹
›
Home
View web version