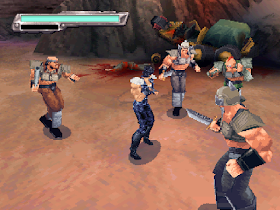 Genre: Action
Perspective: 3rd-person, Side view
Gameplay: Arcade, Martial Arts
Art: Anime / Manga
Setting: Post-Apocalyptic
Published by: Banpresto Co.
Developed by: Natsume Co.
Released: 2000
Platform: PlayStation (PSX, PS1)
Beat 'em up, created by the same manga Hokuto no Ken. The story unfolds in a post-apocalyptic world, where all are ruled by violence. The universal struggle for water and other resources. The game tells the story of a young warrior Kensiro, who is the owners of the martial art of Hokuto Shinken and his struggle with the world of anarchy and chaos.
Hokuto no Ken, Internationally known as Fist of the North Star, is a series of Japanese manga written by Buronson and illustrated by Tetsuo Hara. Published in the Weekly Shonen Jump magazine from 1983 to 1988, the 245 chapters were initially bound in 27 volumes tankōbon by Shueisha. Set in a post-apocalyptic world that was destroyed by a nuclear war, the story centers on a warrior named Kenshiro, the successor to a deadly martial art style known as Hokuto Shinken, which gives him the ability to kill most opponents through the use of the secret vital points of the human body, often resulting in an exceptionally violent and bloody death. Kenshiro dedicates his life to fighting those who threaten the lives of the weak and innocent, as well as rival martial artists, including their own "brothers" of the same clan.
Hokuto no Ken was adapted into two anime television series produced by Toei Animation, which aired on Fuji TV and its affiliates from 1984 to 1988, comprising a combined total of 152 episodes. Several films, OVAs and video games were also produced, including a series of spin-offs centered on other characters in the original story.
‹
›
Home
View web version