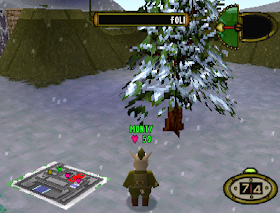 Genre: Strategy / Tactics
Perspective: Behind view
Gameplay: Artillery
Pacing: Turn-based
Narrative: War
Published by: Infogrames
Developed by: Infogrames Studios Limited
Released: 2000
Platform: PlayStation (PSX, PS1)
On the continent of Saustralasia there is a fierce war, and you, of course, are on the front line. To keep your "pork" intact and safe, follow our tactical advice and win this terrible slaughter. Hogs Of War ("Pig Wars") is a video game released for PC and SONY PlayStation in 2000. This interesting game is entirely made in 3D, including the pigs themselves. It in many ways reminds everyone of the well-known Worms - the concept and style are the same, but the game is distinguished by 3D graphics and even more humor. As in worms, for each turn given a certain amount of time - from 10 to 99 seconds, depending on the level being passed. In one move, you can go only one pig - shoot at the enemy, pick up a first aid kit, pretend to be a cactus or make an air trip with a jet pack. The game features a wide range of weapons. Each of the guns is moderately unique and is designed to perform specific tasks. That's why there are no carpet bombing, super-sheep driven and giant bronze donkeys here - the game even boasts its own purely English humor, but tactics and strategy come to the fore after the first five missions. Thanks to Hogs Of War, the genre got out of its 2D skies, new ideas and humor breathed life into this interesting and very funny game.

Enter NAUGHTY PIGS as your name.
On the Name Tour Team screen, enter the password:
MARDY PIGS - get access to the secret team Team Lard, whose players wear very funny hats and are dressed in purple uniforms.
FUNNY BACON - get access to any level.
WILD BOAR - Get the best team with all the weapons.

In this game you can choose a "career" for each of the team members. This will determine his combat skills, as well as the weapons that will be at his disposal. Earn Points Promotion Points, finishing various missions, getting secret details, you can develop their pigs to high rank. Every time a pig gets a boost, her Skills, Health and Weapon arsenal are increased, but in order to get the next rank, they will need even more Promotion Points, otherwise his career will end there. You can choose a different career for your soldiers, especially since the choice here is quite wide.

Each pig starts at the rank of Grunt. These are ordinary soldiers who have only 50 Health Points and a very limited arsenal of weapons. But such a pig can be successfully developed, turning it into a great fighter.

These pigheads are your main "artillery". They are armed with a variety of weapons that can be attacked by the enemy, and are very important when attacking the enemy from a distance. When you develop these soldiers, they get better and more powerful weapons.

These pigs are real masters of explosives. They are armed with mines (Mines), TNT (TNT), and also with shotguns (Shotguns). In battle, they play a very important role, especially when it is necessary to blow up something. When you develop them and raise the rank, they become the owners of a more powerful weapon.

These pigs are real devils. They are able to stealthily sneak up to the enemy and can play a very important role during the fighting. They are armed with Pick Pockets, Hides, Poison Gas and Sniper Rifles. They are able to penetrate the territory of the enemy so that they will not be noticed, because they are completely invisible on the battle map. When developing these soldiers, they even more dexterously penetrate
territory of the enemy, become even more invisible and powerful.

Clearly, there is nothing to do without doctors in battle. Physicians are able to heal other pigs, provide them with the necessary medical care, and if your team is in bad shape, you can send doctors to raise the health level of soldiers. They are armed with conventional standard weapons, and when they get the next rank, they have a lot of various medical equipment.

You can develop almost any pig to a very high rank and turn it into a Commandos. They are elite fighters who possess various magnificent weapons, including Jet Packs, Sniper Rifles and Cluster Grenades. They even know how to swim, which means they are able to move through water barriers without losing health.

This is the highest rank that a pig can achieve. At the same time, it has maximum health, a variety of powerful weapons, and also knows how to swim. But to become a real hero, you need to work hard.
‹
›
Home
View web version