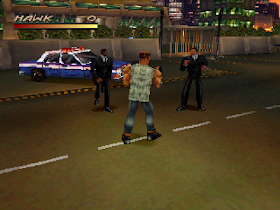 Genre: Action
Perspective: 3rd-person
Gameplay: Beat 'em up / Brawler
Published by: Eidos Interactive
Developed by: Core Design Ltd.
Released: 1997
Platform: PlayStation (PSX, PS1)
The developers of the Tomb Rider series got to the very point of creating a 3D action movie Fighting Force, without all these stupid corridors and rooms in which to turn around properly, it's not like fighting. Here it is possible to go into full swing and kill all who need it.
The game has 30 stages, which are distributed over 10 levels. These stages were developed, of course, under the influence of Final Fight and Streets of Rage. The game starts on a busy street, where completely civilized "Huns" come to your character, and from all sides! But since you are in 3D
space, and even in polygonal graphics, then you do not move in a straight line from the end to the end of the level, but you can sharply change directions, jump aside, throw your enemies on the highway, under the wheels of racing cars. In general, frolic in black! When you come to the exit from the stage, the computer throws you automatically to the next stage, into the next fight. At some levels, there are crossroads and ramifications of roads, so you will have to shave pretty hard before you get to all the stages. In the course of the game, you will have to fight through the office building, submarines (!) And even through the "flying fortresses". Some stages, such as boulevards or city parks, allow you to move around freely and conduct searches. However, the remaining levels also do not greatly limit the ability of players.
But the most otpadnaya idea of ​​the game - all that you find, will fit like a weapon! For example, a cart with hot dogs? Why not! Raise it and stun your enemies. Or hack the machine and "fire" the pursuers with cans and soda. But there are, of course, and normal weapons - knives, pistols, missiles. But why shoot at a dunce if you can knock him over with a car, huh? Of course you will also put your fists in the blood, but that's life.
You can choose any character (and there are four of them - two dudes and two children) and with them to go through the game. Each of them owns 40 devices. Most are the usual kick kick, but there are super attacks and attacks in their arsenal, keep in mind. But the most interesting fight is a fight between two players in the authentic style of Final Fight! In general, thriller, that's it!