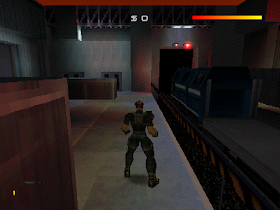 Genre: Action
Perspective: 3rd-person
Gameplay: Fighting, Martial Arts
Setting: Sci-Fi / Futuristic
Narrative: Spy / Espionage
Published by: Eidos Interactive
Developed by: Core Design Ltd.
Released: 1999
Platform: PlayStation (PSX, PS1)
Fighting Force was a kind of attempt to reanimate the once popular genre of street fights like Street of Rage or Fatal Fury. The essence of such games was simple to the extreme - your hero (or the heroine, as a rule, you had a choice of three or four characters) purposefully moves forward, generously handing out blows with hands, feet (knives, crowbars, water pipes) to crowds of numerous enemies. The attempt turned out to be not exactly a failure - the game aroused quite legitimate interest, but still in the yard it's far from the beginning of the nineties, and the requirements for the games are now somewhat different. Primitive Fight does not cause such enthusiasm as before. Therefore, the second part will be no longer so primitive. In particular, recently, games have become popular in which the hero does not advertise his actions, but acts surreptitiously, surreptitiously creeping up to the enemies from behind, suddenly attacking from cover, hiding in the shade, etc. For such games in the Western gaming press has already been invented a special term - Stealth Action (ie, stealthily, stealthily). The brightest representatives of this new genre are such games as Tenchu and Metal Gear Solid. Elements of "stolen" style Core Design is going to be inserted into its new creation.
‹
›
Home
View web version