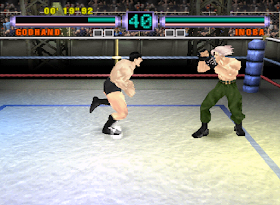 Genre: Action, Role-Playing (RPG)
Perspective: 3rd-person
Gameplay: Fighting
Setting: Sci-Fi / Futuristic
Published by: Square Electronic Arts L.L.C.
Developed by: Dream Factory Co.
Released: 1999
Platform: PlayStation (PSX, PS1)
This game-duel should be pleasant to fans of a series of games Final Fantasy and Final Fantasy VII in particular, because some of the characters of the game are borrowed from this game, it's always nice to meet old acquaintances. The purpose of duels in the game is to possess a legendary mysterious weapon called Ehrgeiz. This game is different from the usual fighting games, not just 3D, but full 3D, ie your actions are not limited to the arena, you can search for shelters, climb up the hill and from there to conduct attacks and all this at a 360 degree view. The battlefield is completely interactive, not only fists but also weapons are used. By maneuverability the game resembles the game Destrega, or one of the modes in Gekido. But this does not end with surprises, there are still mini-games, and even a full-fledged Action / RGR quest in the dungeons, something like what was in the Tobal games.
‹
›
Home
View web version