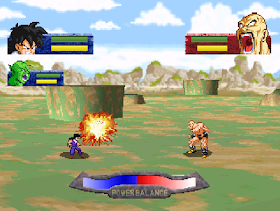 Legend uses a game system different from the previous DBZ. Graphics feature 2D sprites in a 3D world. Although each battle begins on the ground, most of the action is in the air.
The characters fly around each other and use fast kicks and kicks, and Ki bursts, either individually or quickly by pressing and holding the assigned button for a short period of time. Characters have a limited amount of Ki that can be exhausted with use and recharged manually or over time. The characters have two bars on the screen that appear next to the image of their face: these are health (green) and ki (yellow) respectively, if the player uses all of his available ki, his character will stop fighting for exhaustion , leaving wide open for an attack.
The life meter of each character does not deteriorate with normal attacks, only Meteor Atacks reduce the life of a character. The "Power Balance" (balance of power) is a scale that appears at the bottom of the screen composed of the energy of both sides that moves according to who is in control of the fight, after one of the sides fill the bar with its color (Red or Blue), the character managed by the player will perform a special "Meteor Atack" (Meteor Attack), which takes place in a cut scene where the opponent is finished with a characteristic attack of the character in question.
Each game is made up of two teams that can include from a wrestler to 3 wrestlers, who can be organized in innumerable combinations; the player can alternate the character he uses during the battle for any other of his team, as well as decide which character of the enemy team to attack. Each character has a personalized costume for each character, this game is also one of the most played games by everyone, the game also has a story mode that deals with any saga of Dragon Ball Z.