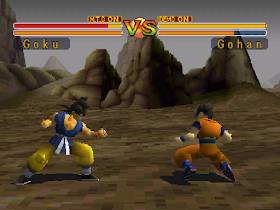 Genre: Action
Perspective: Side view
Gameplay: Fighting
Visual: 2D scrolling
Art: Anime / Manga
Pacing: Real-Time
Interface: Direct Control
Published by: Bandai America
Developed by: Tose Co.
Released: 1997
Platform: PlayStation (PSX, PS1)
The game is based on the anime series of the same name. In this 3D battle-fight you control the familiar fans of anime characters - San Goku, Piccolo, Frieza, Cell, Buu, Vegita and others (total 12 fighters, plus secret ones). The choice of modes is small - Battle Mode, Tenkaichi Budoukai Mode and Build Up Mode (here you can "upgrade" the chosen fighter). A feature of the game is that battles take place not only on the ground, but also in the air (as in the Psychic Force). In general, the game, and the series as a whole is not well established on the consoles of Western players, who prefer much more advanced, technically, and work out the game scenario of the game.