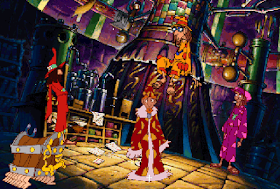 Genre: Adventure
Perspective: 3rd-person
Gameplay: Graphic Adventure, Puzzle elements
Interface: Point and Select
Setting: Fantasy
Published by: Psygnosis Limited
Developed by: Perfect Entertainment
Released: 1997
Platforms: PlayStation (PSX, PS1), DOS
The first series of this game - the gaming version of the popular book of the modern storyteller Terry Pratchett - was at one time one of the first successes of the PlayStation game console that just entered the market. And here comes the second series, with the same wonderful animation, with the same cast of actors led by comedian Eric Idle and with a new entertaining plot. This time the main character of the book - the wizard Rincewind - decided to enter public service in an unusual role - the role of Death (because death itself decided to take a vacation). He wanders the streets of the city of Ankh-Morpork with his scythe and hourglass. Or rather, he wandered, because he is a wizard unfortunate, and something happens to him all the time. And now he is gone, and you have to find out what happened to him.
In the new history of the mass of interesting characters, entertaining puzzles, it is perfectly executed technically. Discworld II is one of the best game quests for the PlayStation system.
‹
›
Home
View web version