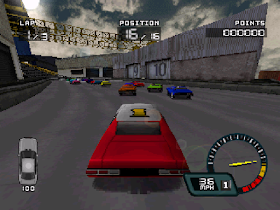 Genre: Action, Racing / Driving
Perspective: 1st-person, Behind view, Top-down
Published by: Infogrames
Developed by: Pitbull Syndicate Limited
Released: 1999
Platform: PlayStation (PSX, PS1)
Hit! Another blow! Slicing and squealing brakes! Cruelty, as we all know, is one of the properties of a person's character. Sometimes each of us enjoyed, destroying something, and was pleased with every moment of such actions. For five years of its existence, Sony PlayStation kept the masses on a tight diet without gross violence and horrendous speeds. But if you combine these two concepts, you will get a very popular game.
The game Demolition Racer, announced as a "racing game with the highest intensity of emergency episodes." In total, the game can take part two people and up to 16 vehicles rivals. Each of them can damage your car. Doors break out, the hood and trunk open, making it difficult to view, the suspension is killed, the engine works as if it were the last minutes of his life (and often, so it is), the glasses fly out, the wheels fly apart, and all that rubbish remains on track! All this hell on the screen guarantees you the full impression of the game in the style of "smash-it-on-asphalt." Any model that you particularly like, can be saved by you. Before the race, you can remake the car to your own taste, changing all its stuffing, steering, wheels and performance. The game has 12 tracks, in which it is possible to cut the road, ramps, as well as eight different templates made to allow slip to the sides and even collisions in the air. Opportunities for damaging a rival machine are plentiful. This is indeed so. On some tracks, players simply struggle for life, while trying to get the maximum number of points in the performance of exciting tricks and wrecks. Your attitude to such slaughter is your personal business. Suffice it to say that turning the opponent's car will bring you significantly more points than just a collision with it.
In the game there are opportunities for special matches. For example, Bowl Match, the equivalent of Death Match. The last surviving player takes the trophy. In the Suicide Race involved 16 cars, divided into two teams of eight cars in each. The task is to break all the machines of the opponent. Career mode consists of 10 different leagues, where you can earn money to buy more and more powerful and protected machines. In Demolition Racer there is also an opportunity for playing together on a split screen. You play against your opponent until one of the machines is broken. There is an opportunity for a normal race, the one who first crosses the finish line wins. This is the only place in the game where you try to avoid contact with other machines.