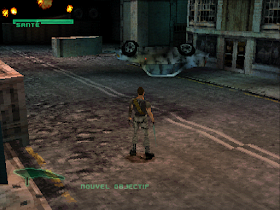 Genre: Action
Perspective: 3rd-person
Gameplay: Arcade, Shooter
Setting: Cyberpunk / Dark Sci-Fi, Sci-Fi / Futuristic
Published by: Sony Computer Entertainment America
Developed by: SCE Studio Cambridge
Released: 2002
Platform: PlayStation (PSX, PS1)
Not a very distant future. You are Lieutenant Riley Vaughan and voluntarily agreed that special implants should be built into your body, as a result of which you received superhuman strength and can thus fight with the most terrible enemies, which means saving the world.
Graphically, the game is pretty decent, and the nature of the game action is somewhat similar to the classic game Metal Gear Solid. Of course, you know her. I must say that it is extremely unpleasant if the video scene is graphically decorated beautifully, and the game itself from the graphic point of view is made a bit worse. This situation is typical. However, in this game, such a flaw was avoided. Music perfectly matches the nature of the game, creates an appropriate mood and when, for example, an alien tank breaks into a bunker, the technical music accompanying this incident perfectly corresponds to the moment.
As you may have guessed, the nature of the game action is extremely intense, fascinating and dynamic. You are acting in the world after a terrible nuclear catastrophe. Generally speaking, it is unclear why to save such a world, but nevertheless the task is such and the vile alien extraterrestrials must be eliminated. Labyrinths look very logical, and puzzles are not very difficult to solve, but you will always have a feeling that you do not know how to act properly, although in the end you will choose the right solution. Of course, Lieutenant Vaughan took on a very responsible mission - the Savior of the World. Although he certainly did not expect that turning him into a bio-cybernetic fighter would be so painful and difficult, but now that everything is over, he is determined to save the world, and you will enjoy it immensely.
‹
›
Home
View web version