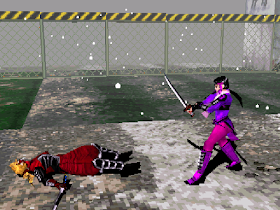 Genre: Action
Perspective: 1st-person, Side view
Gameplay: Fighting, Martial Arts
Published by: Sony Computer Entertainment America
Developed by: LightWeight Co.
Released: 1997
Platform: PlayStation (PSX, PS1)
This game, boldly refused most of the traditionally stable traditions for this genre. There are no "meters of life", time limits, the necessary fixed number of strokes for defeat, etc. And this allowed a great variety of the game due to freedom of movement and active use of the game space. There were many surprises and surprises. So the game can sometimes end up literally in two hits. You successfully conducted the attack, and the mortally wounded enemy collapsed into the ground! A unique system of fixing successful attacks, developed in the Bushido Blade, makes the fights very realistic. If you inflicted a wound in the arm, leg, trunk or something else, the place of defeat is clearly visible. And you do not have any "vitamins"! Well, cut off the enemy's leg, for example, so he will collapse on his knees - he will not be able to stand on his feet until the end of the fight! He stabbed his hand and it would hang like a whip. Well, if you wound an opponent in a vital organ - the heart or the head, then it falls like a felled tree, and the game is over. So it goes! You can win in a matter of seconds, not that in the Soul Blade! But this is not the only innovation Bushido Blade. While holding the L1 button and using the direction buttons, the player can freely move around the arena in 3D space. Each arena is located in the vicinity of the Japanese feudal castle and has several levels. There are various obstacles - trees, gravestones, etc., behind which players can hide and use them as improvised shields from enemy attacks. Do not forget that you can not cover the bamboo very much, the sword will cut it easily.
‹
›
Home
View web version