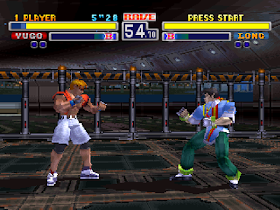 Genre: Action
Perspective: Side view
Gameplay: Fighting
Published by: Sony Computer Entertainment America
Developed by: Raizing Co.
Released: 1997
Platform: PlayStation (PSX, PS1)
This is one of the most vigorous fighting games on the PlayStation. Continuous action, lightning combinations, tricks, tricks, great jumps, acrobatics and all that. And a very interesting novelty - each character can fight in two different forms: a man and an animal. And these forms can change during the battle. The game action is very saturated and full of surprises, the script is very dynamic. Each character has a mass of combination possibilities. The graphics are simply brilliant, especially the animation of animals. The game has many diverse and exciting modes, you just can not miss it.
‹
›
Home
View web version