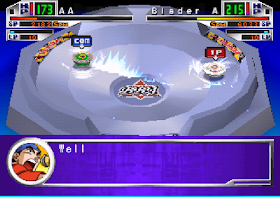 Genre: Action, Simulation
Perspective: Top-down
Art: Anime / Manga
Published by: Crave Entertainment
Developed by: Wavedge Co.
Released: 2002
Platform: PlayStation (PSX, PS1)
Beyblade is a competition of two tops on a special round field, beyond which you have to push out the opponent's blade. Despite the seeming simplicity of the game, victory requires its own tactics, a certain balance between the speed and mass of the blade and, of course, luck. For our heroes, Beiblade is not just entertainment, but your world, successes, failures and irreconcilable confrontations. A real fan of the game, the duel will replace both food and sleep, and defeat will only become an incentive to further hone their skills.
‹
›
Home
View web version