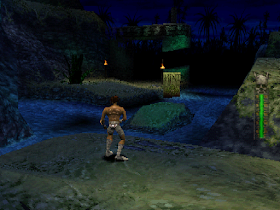 Genre: Action
Perspective: Behind view
Gameplay: Puzzle elements
Published by: Eidos Interactive
Developed by: Crystal Dynamics
Released: 1999
Platform: PlayStation (PSX, PS1)
Akuji, a representative of an ancient African tribe, was very cruel not only to his enemies, but also to his close ones. Perhaps that's why Akuji was killed at his own wedding with his fiancee, Kaisha, with his brother Orad. Fortunately, during his lifetime, Akugi gave himself up to the study of the main treasure of his religion - voodoo magic. This is what contributed to the fact that the soul of a young warrior was not immediately sent to the Cloaca, having got into some kind of purgatory. Having concluded a bargain with the ruler of the other world, Baron Samdi, Akudji goes on a journey through the afterlife to gather the souls of his dishonest ancestors. It is the souls that will become the key to saving the soul of his beloved and revenge his murderer.
Immerse yourself in this cruel, full of hatred and pain the world of Akugi, performed in the best traditions of the Tomb Raider and Soul Reaver series. For one essential but - the blood. There's a lot of blood here.
‹
›
Home
View web version