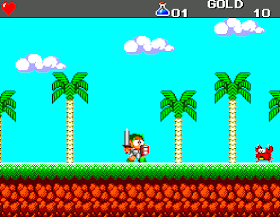 Genre: Action
Perspective: Side view
Gameplay: Metroidvania, Platform, RPG elements
Visual: 2D scrolling
Setting: Fantasy
Published by: SEGA of America
Developed by: SEGA Enterprises Ltd, Westone Co.
Released: 1989
Platforms: SEGA Master System (MS), TurboGrafx-16 (TG-16)
This "third" part is actually the fourth in the Wonder Boy series. The game returned to the platform-platform RPG, roughly as it was in Wonder Boy in Monster Land, but, of course, with significant changes, additions and improvements. This was facilitated by the fact that the game was originally developed for the Sega Master System home console, so it is not so arcade, you can play it slowly and even save using the password system. Later Wonder Boy III: The Dragon's Trap was also released on PC-Engine and Game Gear, under the names Adventure Island and Monster World II: Dragon's Trap, respectively.
Dragon's Trap - the direct sequel to Wonder Boy in Monster Land, begins the game with a small flashback, in which you need to go through the last dungeon from that same game and score the final boss - the dragon-dragon. However, the dragon was defeated, but not broken, he imposed on the hero curse, which turned him into a dragon. And from now on your task will be to find a way to remove this curse.
After the prologue, the game begins. You have to manage a pretty pretty-looking dragon, spitting fire. But, as you guessed, this is only the first form of the protagonist. In the future, for every victory over the boss, you will be able to turn into other creatures: a lilliput, a water lion, a lion man and even a hawk. Of course, each of them has his own individual abilities.
The dragon is not particularly useful, except that he can spit fire at a distance; Lilliput is able to climb through narrow apertures and cling to walls; water can swim under water; the lion is a good fighter, and besides he can break stone blocks under his feet (for this one must also find a special sword); The hawk is capable of flying. The game has special rooms in which you can change your form, but they will be available relatively soon.
Now about the role system. First of all, I must say that here, unlike Monster Land, you can freely navigate between locations and safely farm out the monsters of gold, not being afraid that you will run out of time. The received money is bought with improved equipment or treatment. And in some stores you do not sell anything until you increase your charisma (this is done by collecting special stones - Charm Stones). But the maximum health can be increased only by finding in the chests big hearts.
System spec. The weapons here are very similar to Monster Land. From enemies from time to time drop out a different kind of icon: fireball, whirlwind, boom, boomerang and lightning. All this stuff, of course, can be used in practice, but in my opinion it's much easier to rely on good old physical attacks. Locations in the game are very straightforward and long, but without any puzzles and labyrinths. Your main task will be, first of all, the battle with the enemies.
But, despite the not very expressive design of locations, I must say that Dragon's Trap is a very interesting and fascinating game. And certainly this is one of the best action-RPGs in the library of Master System: a lot of secrets, nice music, colorful graphics and a good level of complexity, directly depending on how thoroughly you explored the game. Fans of the platformer-RPG mix are strongly encouraged to pass!
‹
›
Home
View web version