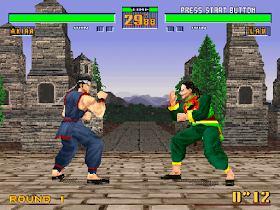 Genre: Action
Perspective: 3rd-person
Gameplay: Fighting, Martial Arts
Art: Anime / Manga
Published by: SEGA of America
Developed by: SEGA-AM2 Co.
Released: 1995
Platform: SEGA Saturn
The combat system in Virtua Fighter 2 is identical to the previous game in the series. The player controls one of the fighters, each of whom owns different combat techniques and different techniques of conducting hand-to-hand combat. In some cases, to win the player must throw the opponent out of the ring.
The dimensions of the arena can be adjusted in the game settings. In addition, for the characters, you can adjust the energy to infinity, which gives the player an advantage when the battle against artificial intelligence begins. If the size of the arena is minimal and infinite energy is chosen, then the characters are given an accumulation of life points, which can lead to a sumo match, in which victory is achieved after the opponent's knockout.