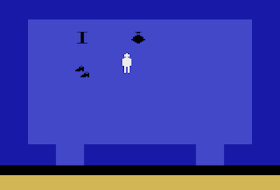 Genre: Action
Perspective: 3rd-person, Top-down
Setting: Fantasy
Published by: Atari
Developed by: Atari
Released: 1983
Platform: Atari 2600
Swordquest - a series of games for the Atari 2600, developed and released in 1982-1983 by Atari. Swordquest featured a contest arranged by the publisher, the winners of which were awarded with expensive prizes totaling $ 150,000 (4 mascots for $ 25,000 and a sword for $ 50,000).
In total, four games were planned in the series, three of which were released: Earthworld, Fireworld, Waterworld (released in limited edition among subscribers), Airworld (the release was canceled). Each game was completed with a colorful comic strip drawn by artists Roy Thomas and Jerry Conway from DC Comics.

The gameplay resembled the earlier game Atari Adventure: the player had to roam between rooms, collect items and combine them among themselves. Having typed a certain combination, the player received a hint. Sometimes transitions between rooms alternated with logical games. The aim of the games was to find all the clues. The structure of rooms for each of the games was subject to a certain rule: Earthworld was based on the signs of the zodiac, Fireworld - Tree of Life, Waterworld - chakras, Airworld - hexagrams from the Book of Changes.

Once in the Water World, the twins split again and at the same time forgot their names. Tara, traveling on an ice ship, met Captain Frost, who was searching for the artifact "Crown of Life", with which he hoped to rule the Water World. Torr, while traveling on the underwater world, met the former queen Aquan, who needed the artifact in order to restore his throne.
Facing each other, the twins begin to fight each other for possession of the crown. Everyone prays to his deity, thus summoning Mentorra and returning his memory. After discarding their swords, the twins divide the crown into two parts, handing over half the captain and queen. After that, "Sword of Ultimate Sorcery" teleports the twins to the Air World, where they will fight with King Tyrannus and Conjuro.

The prompts were two digits, which were page numbers and a block in the accompanying comics. The player was asked to find in this block a secret word. After collecting five secret words, the player could fill in the participant's card and send it to Atari. Since there were more than five cards, the player needed to exclude incorrect words. If all five words were correct, then the player got a chance to get into the final stage, organized by Atari, and to battle with other finalists in the modified version of the game. The player who finished the game was recognized as the winner first and was awarded a valuable prize.
It was planned that the winners of all four stages will meet in the super-final for the right to own "Sword of Ultimate Sorcery", a precious sword of pure silver and inlaid stones with a gold hilt worth 50 thousand dollars.
However, only two competitions were held out of the planned four, followed by the 1983 crisis in the video game industry. Atari, experiencing financial difficulties, was forced to abandon the competition. It is for sure not known what happened to the remaining unpriced prizes. There is a version that the sword went to one of the former owners of Atari Jack Treemiel. [1]
In the final of the Earthworld contest, out of 5000 applications, only eight people were found who correctly picked up the right clues. The final winner was the twenty-year-old Detroit resident Stephen Bell, who received the "Talisman of Penultimate Truth", a gold medallion encrusted with 12 diamonds and precious stones that form the zodiacal signs. The cost of the talisman was estimated at 25 thousand dollars.
The finalists of Fireworld turned out to be more than planned 50 and much more than in the first competition, so the organizers announced an intermediate essay contest on the theme that the players liked in the game. After the qualifying stage the final was held. The winner was Michael Rydaut, who received the "Chalice of Light", a goblet of gold and platinum, decorated with precious stones and valued at $ 25,000.
Waterworld was limited only to Atari Club members (subscribers had the privilege of getting games before the release date). The final for Waterworld was canceled at the last moment. The crisis of 1983 was approaching, and Atari decided to cancel the whole action. Two previous winners were awarded $ 15,000 each, and Waterworld finals - $ 2,000 each. [1] The winner of this stage was to get "Crown of Life", a gold crown inlaid with precious stones worth 25 thousand dollars. It is for certain unknown what became of the crown after the cancellation of the competition.
The last part of the series, Airworld, was not completed and did not even have a game prototype. Only information about the designers' intentions about the game process has been preserved. The prize of the Airworld competition was to become "Philosopher's Stone", a casket made of jade, decorated with gold and precious stones, which was valued at 25 thousand dollars. There is also no information about the fate of the casket.
‹
›
Home
View web version