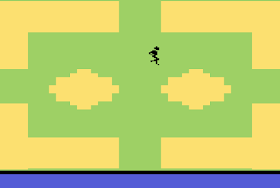 Genre: Action
Perspective: Bird's-eye view
Visual: Fixed / Flip-screen
Setting: Fantasy
Published by: Atari
Developed by: Atari
Released: 1982
Platform: Atari 2600
After the victory over the creatures of the zodiac and over the thief Herminus, the twins found themselves in the room where the artifacts were stored. When trying to take a sword, he burned a hole in the altar, and both twins were in the Fiery World. Torr, separated from his sister, called Mentorra, who spoke about the artifact "Chalice of Light" ("Chalice of Light"). The twins reunite, they find the Cup, but it turns out that it is not real. Herminus gives them a Cup that grows until it becomes big enough, then absorbs the twins and teleports them to the Water World.
‹
›
Home
View web version