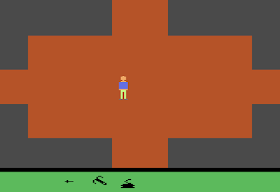 Genre: Action
Perspective: Top-down
Gameplay: Puzzle elements
Setting: Fantasy
Published by: Atari
Developed by: Atari
Released: 1982
Platform: Atari 2600
The plot of the first game develops around the twins of Tarra and Torra. Their parents were killed by King Tyrannus because of the prophecy predicted by the wizard of King Conjuro. Twins raised thieves. Once, having penetrated into the rooms of Conjuro, they inadvertently gave their origin to the magician. Fleeing escape from the called demon, the twins smashed the stolen gem that attracted him. After this, two old Tirannus advisors appeared, told about the artifacts "Sword of Ultimate Sorcery" and "Talisman of Penultimate Truth" and teleported both twins to the Earth world.
‹
›
Home
View web version