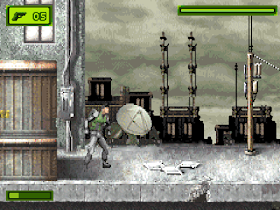 Genre: Action
Perspective: Side view
Gameplay: Platform
Visual: 2D scrolling
Narrative: Spy / Espionage
Published by: Ubi Soft Entertainment Software
Developed by: Ubi Soft Divertissements Inc.
Released: 2003
Platform: Game Boy Advance (GBA)
Two CIA agents were planted somewhere on the territory of Georgia, and the main character Sam Fisher must find them and take them home. Sam has a variety of techniques that help him covertly enter the enemy territory, hide from the patrol; clinging to hands, moving along the cornices or, creeping over the ceiling, get out through the open window to avoid encounters with enemies. A total of 11 missions, including training, where players can master the various techniques Fisher must perform in the course of the assignment.
At the disposal of Sam are various devices: special pintles for opening secret doors; night vision goggles, thermal goggles, smoke grenades and a pistol with a silencer. Fight, however, will have a lot, including many bosses one on one.