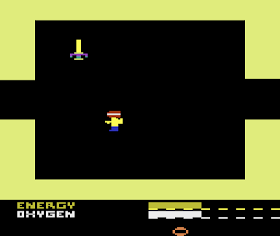 Genre: Action
Perspective: Top-down
Gameplay: Puzzle elements
Setting: Sci-Fi / Futuristic
Published by: Atari Corporation
Developed by: Axlon
Released: 1989
Platform: Atari 2600
By the end of the life of the Atari 2600, one of those hits that it is customary to put on the same line with The Legend of Zelda. In fact, the Secret Quest game became an example of the fact that the "old woman" A2600 even ten years after the release was suitable for creating complex and decent games in terms of graphics. The brilliant Nolan Bushnell, who had already quarreled with Atari, had once again built a bridge responsible for the love and friendship with the former employer.
Company Bushlulla Axlon in 1989 developed an analogue of "Zelda", a game that captured the US market two years earlier. That's why Secret Quest had to collect crumbs after the noisy release of The Legend of Zelda - and then only among the audience who did not want to switch from Atari 2600 to NES. Secret Quest was the last game officially released for the console in the US. As for Europe, it lasted until 1992, and there Acid Drop became the swan song of the A2600. But about her somehow some other time.
‹
›
Home
View web version