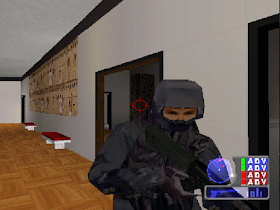 Genre: Action, Simulation, FPS
Perspective: 1st-person, Behind view
Gameplay: Shooter, Tactical Shooter
Published by: Red Storm Entertainment
Developed by: Saffire
Released: 2001
Platform: PlayStation (PSX, PS1)
One wrong shot or the slightest mistake in assessing the situation, a second delay, and then the entire operation was failed. The authors envisaged the possibility of almost complete control over a team of 4 special forces: it will be possible to determine who and how to cover, how to choose weapons, whether to act alone or by pairs, and to find out in detail other strategic points. It is known that Saffire went on to simplify some particularly complex tasks. According to the story, famous fighters with world crime are again involved in international antiterrorist operations, ranging from the classical release of hostages in an airplane or a tense and dangerous mission in a magnificent museum of fine arts. Gradually emerges the two main villainous forces behind the organization of all these crimes. Who do you think it is? Correctly, this is a Russian mafia, great and terrible, and some kind of Middle Eastern criminal group (one must think, evil Arabs), bloodthirsty and ruthless. Among other things, the authors promise an interesting innovation - the appearance of sniper weapons. Now the special forces will have a special "sniper skill", reflecting the degree of possession of these weapons. Since the game implements the principle of "death from one shot," a lot of things will depend on the quality work of well-aimed shooters. In addition, the opportunities for movement have been expanded. You can cross the crouching and look around the corner, which significantly reduces the risk of getting caught in a crazy bullet of the evil Russian Wahhabi.
‹
›
Home
View web version