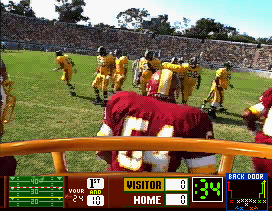 Genre: Sports
Perspective: 3rd-person
Visual: Cinematic camera
Art: Video backdrop
Interface: Menu Structures
Sport: Football (American)
Published by: Digital Pictures
Developed by: Digital Pictures
Released: 1995
Platform: 3DO Interactive Multiplayer
How much on the game console 3DO came out a variety of unusual and strange games - Quarterback Attack with Mike Ditka one of them. At first glance, it may seem that this is a sports simulator of American football, also referred to as rugby. But in fact this is a defender simulator, that is, you will control just one player from the team. The game is named after Mike Dick, he will act as your team's coach. The game itself is made using FMV technologies, that is, it is actually an interactive video.
Other game titles: Quarterback Attack - The Professional Quarterback Simulator.
‹
›
Home
View web version