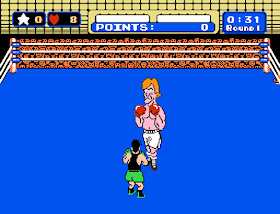 Genre: Sports
Perspective: Bird's-eye view
Interface: Direct Control
Visual: Fixed / Flip-screen
Sport: Boxing
Published by: Nintendo of America Inc.
Developed by: Nintendo R&D3
Released: 1987
Platform: Nintendo (NES)
Mike Tyson's Punch-Out !! - this is one of the first boxing simulators in history and the first truly popular. The protagonist - Little Mac is trying to make a career as a boxer and win the league title. On his way are colorful, fictional boxers, after which he must fight with the great Mike Tyson himself! This game is often present in the "pop" tops of complex games, sometimes even on the first place, but then in "usual" complexity, and there is also the "unusual", which all these tops for the belt will shut.
Yes, not everyone knows that the game has a secret mode called Another World Circuit. Password is not specified in either
game, or in the manual. To begin with, even to include this mode is not so simple. You need to enter the code and activate it
by pressing simultaneously
A + B + Select + Start
In it, the main character under the guidance of the player needs to pass nine opponents without defeats. Yes, after losing to any opponent, no continuations will not be given. Probably, therefore, opponents are less than in the main game mode.
The process of the game is as follows: the enemy boxer tries to beat the nonsense out of our character, and you use the joystick to dodge and charge in time. Each fight lasts three rounds of three minutes each. If the boxer is knocked down three times in one round, he automatically loses. Each enemy has a certain set of actions, and it is necessary to play, starting from what the opponent does. That is, it's a game of reaction. And here is the most interesting. The timings for all these blows are different, so it's just impossible to count the time. It is necessary to react in time to the reception and to weigh the slap in response. Dodge a little earlier or later - miss a blow that will leave a good bruise for the future. But this game is not only a reaction. Each opponent needs to look for tactics that are not always obvious. Of course, now is the age of the Internet, and you can see tactics from other players, but there are a few nuances. Each player passes this game, as it is convenient for him and, probably, it is necessary to review tons of video in order to find the tactics that you will get stably. Our protagonist is very weak, but fast. Therefore, when a player misses a blow, he loses many lives. And when Little Mac strikes, it takes very little. Each subsequent opponent is more difficult than the previous one, because their strikes are getting stronger and more dangerous, but ours remain the same. Yes, this is not RPG, and the pumping of the character is not brought. Some enemies are generally capable of knocking down with one blow!
And now the highlight of the program is Mike Tyson himself! It's so steep that it sends Mack down in one blow! Well, we already said that some other boxers can do the same. But we did not say the main thing. Tyson uses this blow throughout the first half of the first round! Three times I missed the blow, and you start from the beginning of the game. And this blow has not only incredible power, but also excellent speed. In this game, there is no possibility to use a pause, so it will not be possible to simplify the task with this button. Therefore, it does not matter which player has experience in games. If he has a bad reaction, then go to him Tyson long and painful. Because reaction is a skill that can not be pumped. This is not a game element, but the ability of the person himself. If the player has a good reaction, then all the same he will have to learn how to pass all the boxers as efficiently as possible, because there is only one attempt at passing.
But to Mike still need to defeat the other 8 opponents. Each of them has its own strengths, which will not allow this game to pass quickly. But when you already know everything and know how, the game is no longer something extraordinarily complex, and its passage is already a matter of time.
Let's sum up the results. The complexity of the Another World Circuit regime is that the game of tactics knowledge, reaction, the last boxer is incredibly strong and the defeats send the player to the title screen.
‹
›
Home
View web version