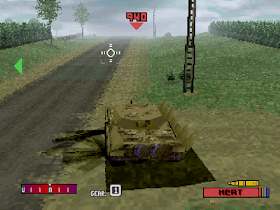 Genre: Action, Simulation
Perspective: 1st-person, Behind view
Vehicular: Tank
Setting: Historical Events, World War II
Published by: Agetec
Developed by: ASCII Entertainment Software, Soyuz
Released: 2001
Platform: PlayStation (PSX, PS1)
The game Panzer Front is quite original, both in terms of the nature of the action, and in design. It seems to you an opportunity to take your place in a luxurious tank and destroy everything that is just moving. At first glance, it may seem like a normal shooter, but in fact it is not at all. The game is extremely realistic and is simply an outstanding imitator of tank battles. This impression is confirmed by a large number of very accurate tanks of the Second World War. At your disposal a variety of ammunition, great sound and lighting effects. Anyone who relies only on fast fingers, lying on the trigger, will not succeed, it is necessary to work with the brain. Tank fighting takes place in the very places where the famous tank battles took place; they are executed in a very decent quality. The nature of the terrain must be taken into account in order to detect the enemy first, otherwise your tank may be destroyed before you realize what's wrong. It is necessary to carefully study both the strengths and weaknesses of each tank, be sure to build a reasonable strategy, act quickly, resolutely, destroying enemies as soon as they appear. You can choose German, Russian tanks or allied combat vehicles (Allied forces). These will be the most famous tanks of the Second World War: Panzers or Panthers, Churchill or Sherman, the famous T34 tank and the deadly German tank King Tiger. Each tank has its own characteristics, and to them it is necessary not only to adapt, but also to take into account. There is an opportunity to conduct more than 30 different tank battles, some of them are fairly simple, you can say, straightforward, but there are also extremely difficult missions, so many hours of exercise will be necessary before mastering this game.
During the first attempts, of course, various misunderstandings and griefs are possible. It may seem that the tank is moving, turning and shooting too slowly, it is possible that enemies will be able to destroy you. But only until you perfectly master the control and send missiles exactly to the enemy. Then you will understand what a magnificent, delicate and strategic game, and quite accurate from the point of view of history. Perhaps, even feel yourself in a real tank, participating in a real war.
In every battle you need to act in different ways. The number and type of enemies depends on the route you choose; how quickly you can destroy enemies, effectively use your allies. In short, it all depends on your abilities and the choice of the tank, so you need to properly get acquainted with the device of the game and work out the basic tactical techniques.
At the very beginning, complete the training level (Training Level) in such a way as to master the management and shooting, maneuvering, etc. etc., especially since you often have to act on your own. This is actually much more interesting than knowing how and when to act on a hint, because in this case the game will be more exciting for you. Most importantly, we will repeat, master management, develop strategic thinking, and then you will get a great pleasure from this rather complicated and very exciting game.
‹
›
Home
View web version