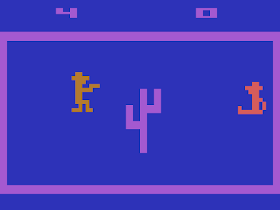 Genre: Action
Perspective: Bird's-eye view
Visual: Fixed / Flip-screen
Gameplay: Arcade, Shooter
Interface: Direct Control
Setting: Western
Published by: Atari
Developed by: Atari
Released: 1978
Platform: Atari 2600
In Outlaw, the player controls the shooter in the Wild West. There are one and two players for the game. In one player version, the goal is to shoot the moving target as many times as possible in 99 seconds. In two players, each player tries to be the first to shoot his opponent ten times. Several versions of the game for one and two player version.
In the middle of the screen is one of several possible obstacles to make the game more difficult. A giant cactus, stagecoach, moving stagecoach, or fragile walls of all can be blocked on target or provide some kind of shelter for the player to hide from the shots of opponents. The player also has a choice of limitless fire or just a revolver. If the player chooses six shooters, then each player must use all six shots before any player can reboot. Finally, there is a recreation option. With rest, the player can immediately move after firing; without rest, the player must remain motionless for as long as his bullet on the screen.
‹
›
Home
View web version