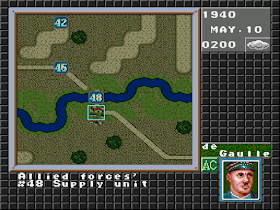 Genre: Simulation, Strategy / Tactics
Perspective: Top-down
Visual: Isometric
Setting: Africa, Europe, Historical Events, World War II
Published by: KOEI Corporation
Developed by: KOEI Co.
Released: 1994
Platform: SEGA Genesis / Mega Drive
Good strategy game. It's a pity that the topic was chosen, as if to say softerly, inaccurately. If we talk about the Second World War, it is not with such historical distortions.
Your attention is offered five battles during the Second World War, but dear Russians will be especially interested in two of them - the Battle of the Kursk Bulge and the final assault on Berlin. However, lovers of street skirmishes do not have to worry - you will not be allowed to leave the Reichstag, leaving you to fight in the suburbs. But the defense of Berlin (when playing for the Germans) in the game plan is simply amusing - you sit yourself, fencing yourself off from the allied hordes of a minefield, and shooting rare paratroopers. Still, KOEI could not reliably relinquish the course of the war of those years.
When you sort out ethnic preferences and stand under the banners of the chosen party, you should distribute the generals in their posts. Here the "allies" are again waiting for a surprise - it turns out that Zhukov is not the most talented of our generals! The coolest one is Rokossovsky, and Zhukov, according to his characteristics (popularity, etc.) stands at the level of Galanin and Konev (in no way do we want to offend the latter, but still ...).
To begin the military operation, it is necessary to appoint the Commander-in-Chief, his Deputy, the Chief of Intelligence and the commanders of the three divisions. Here you can not really think about it - all the same, even the most heaped commander with five tanks can not score a competitor with ten, so choose just your favorite faces and go ahead!
Unlike other strategic games of this type, you will not be able to place troops by your own hand - KOEI is trying to maintain historical certainty. Your army is divided into three (in some cases, four) divisions, which include several combat units, a logistics battalion and a group of construction miners-pontoon operators. The last two squads can not fight at all, and therefore we recommend keeping them away from the front line.
OE - the game is completely Turn-based. That is, you first give orders to each living unit and then pass the move to the enemy. In addition to simple orders (go, attack, defend), there is still a special. command - to call saboteurs or ask for help from the air (by the way, the Russian aircraft are headed by the well-known uncle Tupolev). The first can cut the lines of communications of a separately selected enemy detachment (very good, but rarely obtained), kill any of the enemy commanders (does not work at all) and build a small sabotage in the city (it turns out rarely, and it's of little use). That's much more useful from the air fleet: you can ask them to inflict a point-bomb strike at the specified square (not bad against the infantry), make a parachute drop (also good, but have to share their soldiers), and, finally, the most useful - to drop ammunition and food to the chosen detachment (everything is fine, but it takes a whole day ...). Still have to take into account that special. The team can only be used once per turn.
The only one where OE is 100% reliable is military equipment. Whoever you do not meet in her lists, only the heavy tanks "Tiger" there are five configurations! The real revelation is that there is a third, and not yet released, version of the T-34 tank in the game! Did not expect such awareness from the Japanese ... And of course, what kind of credibility without the legendary Soviet missile system with the native name of "Katyushas"!
But, alas, the thoroughness in the compilation of lists of armored vehicles did not affect the game in any way. First, it's impossible to choose the army itself anyway (and you will never question the necessary reinforcements), and secondly, the differences in the combat characteristics of, for example, the tanks "Yagdpantera-2" and "Yagdpantera-2 bis" are so small that in the game, both machines act in the same way. So in the menu "Army" you have to walk only as a museum with beautiful pictures ...

Before bombing the city, send him a scout. If his mission is successful, send aviation there. The enemy will have more destruction.
‹
›
Home
View web version