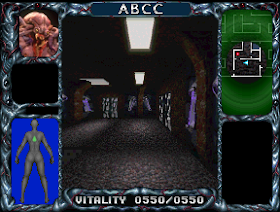 Genre: Role-Playing (RPG)
Perspective: 1st-person
Pacing: Turn-based
Setting: Sci-Fi / Futuristic
Published by: Sanyo Electric Co.
Developed by: Sanyo Electric Co.
Released: 1995
Platform: 3DO Interactive Multiplayer
Game N.O.B. Neo Organic Biofarm for the game console Panasonic 3DO Interactive Multiplayer was released, only for the Japanese market, perhaps this explains the oddity of it. The game takes place in the future in 2197 in a secret laboratory where various biochemical experiments are conducted on the DNA of various creatures. As a result of these experiments, various mutants (urodtsy) appear. You choose one of the seven characters. After that, you have to wander along the corridors of the laboratory from the 3D render, fighting with other monsters.
‹
›
Home
View web version