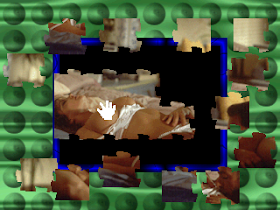 Genre: Puzzle
Pacing: Turn-based
Gameplay: Board Game, Cards / Tiles, Mental training, Tile Matching Puzzle
Narrative: Adult
Published by: Vivid Interactive
Developed by: Vivid Interactive
Released: 1994
Platform: 3DO Interactive Multiplayer
There were a lot of erotic projects for 3DO Interactive Multiplayer, and not just any Plumbers Do not Wear Ties, but rather about Immortal Desires, Love Bites or Mind Teazzer, in short, about any project from the company Vivid Interactive, as it can be considered as the main supplier of strawberries to the game platform 3DO. The strawberry, however, turned out to be sour. It seems like the erotic is so-so, and it's not interesting to play well, and in Mind Teazzer the top of the combination of both these unpleasant moments was probably successfully achieved.
One might think that the genre of pornographic games is generally a long-liver. Well, what's wrong with that? The process has not changed for centuries, and technology does not play a special role. In this case, we are dealing with an ordinary video, because in the nineties it was in vogue. It is in principle and now in fashion, because eroticism continues to look at any of the available carriers or on the Internet. See how others do it specifically to see this, if not noble, then at least exciting. So of course it could well be in the case of things quality, in the sense, good eroticism, which I absolutely did not find in the Mind Teazzer, although with a pure soul I gave the game a full half hour. I searched, I searched and did not find. Some mucks.
What did I particularly dislike about it? Well, in principle, and like there is nothing. The whole game is such a puzzle. The choice is proposed, something about nine puzzles that need to be collected. This is the simplest process, and it's probably even good, because if it were a little more difficult, at least some desire to assemble this puzzle, there and then would be lost. Can not be an incentive to serve the picture that you collect. Well, there's nothing to look at in these pictures. Frank is unconditional and maybe even good, but then after compiling the puzzle you think that you will see an animated fragment of what you actually collected and here comes disappointment, because the fragment will of course be shown (the game is full of digitized video), but to watch this very fragment will be more than a boring occupation.
Show is not the same as what you gathered in the picture, but as a rule you become a witness of another sexual intercourse. Well, at least everything that will be shown will be a bit of a look at this very act. They will show a close-up of the face of some babishchi with the incipient signs of the second chin (or even cellulite, on his face then), and somewhere there next to a striking gouge, which makes it not clear what. With the same success, he can whip a festive cake like a bear from Fatty Bear's Birthday Surprise or drive nails. In Soviet times, he would be called Stakhanovites and awarded the Order. But here he naturally does not receive any order, but only some kind of praiseworthy exclamations of the above-mentioned person. And so almost all the videos (because all did not look), only with the change of characters.
‹
›
Home
View web version